HE IS THE PANTOKRATOS -THIS JESUS!!

(…continued from part V)   I am totally flabbergasted at the reading and the reasoning stance of Charles Taze Russell and his Jehovah’s Witnesses in relation to Revelation 1:8, “I am Alpha and Omega, the beginning and the ending, saith the Lord, which is, and which was, and which is to come, the Almighty.” I did point out the epithet ‘Almighty’ that Jesus called Himself; whether it deifies Him or not. The Witnessing guy explained it away by saying, “It says ‘Almighty’ not ‘Almighty God’ in the Bible.” This quite easily exposes their scriptural bankruptcy. Let us understand this verse very well by starting with ‘I am’ which is egō eime. ‘Alpha and Omega’ being the first and the last of Greek alphabetical symbols speak of words – of verbal communication.

Every verbalism that depicts Christological bankruptcy is a betrayal of abject ignorance. Alpha to Omega speaks of wordage and utterance. Alpha, being the first of Greek letters, makes Jesus the first to know before God can be known. What about from beta (the 2nd Greek letter) to psi (the 23rd or 2nd to the last letter)? Jesus fills it for: does the Bible not teach that, “And he is the head of the body, the church: who is the beginning, the firstborn from the dead; that in all things he might have the preeminence” in Colossians 1:18? As the Omega Jesus is what Romans 10:4 says, “For Christ is the end of the law for righteousness to every one that believeth.”  The word ‘end’ in Romans 10:4 is telos (tel’-os) ‘From a primary word τέλλω tellō (to set out for a definite point or goal); properly the point aimed at as a limit, that is, (by implication) the conclusion of an act or state (termination [literally, figuratively or indefinitely], result [immediate, ultimate or prophetic], purpose); specifically an impost or levy (as paid).’

‘Beginning’ of Revelation 1:8 is archē (ar-khay’) ‘(properly abstract) a commencement, or (concrete) chief (in various applications of order, time, place or rank).’ And ‘ending’ is telos, the as ‘end’ of Romans 10:4. In oldest manuscripts ‘Lord’ comes out as “Lord God” which makes the Greek kurios for ‘Lord’ an equivalent of Hebraic Jehovah Elohim. Which is, and which was, and which is to come, is first used in Revelation 1:4 in the description of God, the Father, seated on the throne. This expression is a Jewish periphrasis for the name Jehovah they regard as incommunicado. Why would John, of the divine use it in verse eight to describe Jesus Christ? ‘Which was’ is indicative of eternal past. ‘Which is’ points to His Divinity in the present time, while ‘which is to come’ concludes the indeclinable stance of Him who continues to remain His unchangeableness in eternity to come; and this is the Jesus Charles Russell and the host of his Witnesses refuse so blatantly to see. Does this change the unchanging Jesus of Hebrews 13:8, “Jesus Christ the same yesterday, and to day, and for ever?” Hallelujah!

He proved to be the LORD, even over the waters!

Charles Russell paraded himself in the bucolic office of Pastor. He did admit during a judicial cross examination that he could not read Greek at all. The aloofness that tended his ignorance of Greek or the Septuagint did escalate his myopic view of Jesus. It worked against his understanding of the epithet, ‘the Almighty.’ Fifty-seven times ‘Almighty’ shows up in the entire Bible. For the forty-eight times of the Old Testament is the Hebrew shadday (shad-dah’-ee) ‘almighty, most powerful. Self-sufficient One. Provider. Shaddai, the Almighty (of God).’ Shaddai, to the Jews, is associated with the breast, hence, seen as the ‘many breasted One.’ There is nowhere it is written with a small letter ‘a’ simply because it qualifies the invulnerable strength of Jehovah. In all the 57 appearances it is never used of any human, animal, an inanimate object or any situation. Almighty in Greek, pantokratōr (pan-tok-rat’-ore), comes from two words: pas and kratos. Pas (pas) means: ‘each, every, any, all, the whole, everyone, all things, everything. Kratos (krat’-os): ‘Perhaps a primary word; vigor [“great”], (literally or figuratively).’ Every Almighty is in reference to God. Would Jesus, may I ask Jehovah’s Witnesses, had arrogated the title of Almighty to Himself? Jesus definitely made a clear categorical statement and the truth of which is read in John 8:32 “And ye shall know the truth, and the truth shall make you free.” Amen! 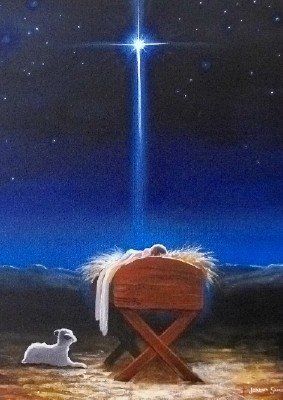 The Eternal was born for our eternal rebirth

You can get born again by praying this prayer with all your heart and truthfully: Dear heavenly Father, I come to You now in the name of Jesus Christ. I believe in my heart that Jesus is the Son of God. I believe in my heart that Jesus died for my sins and You raised Him from the dead. I confess with my mouth that Jesus is Lord, and I receive Him as my Lord and my Saviour. I give God all the glory, Amen.      (…to be continued…)