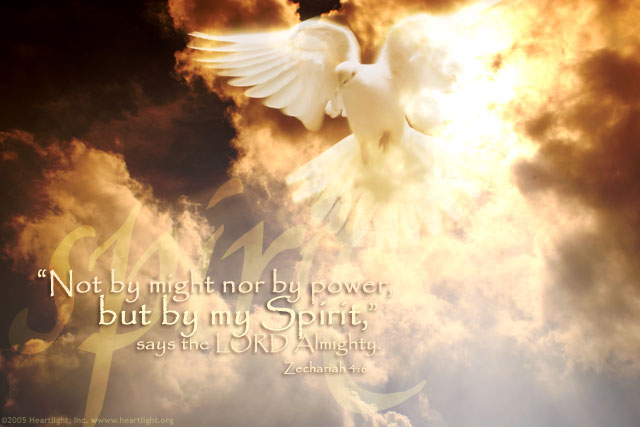 But the Comforter, which is the Holy Ghost, whom the Father will send….

In the Arian view, “God the Father is a Deity and is divine and the Son of God is not a Deity but divine (I, the LORD, am Deity alone. Isaiah 46:9). Holy Spirit (the illuminating and sanctifying power) is neither God the Father nor Lord/Master. First Corinthians 8:5 – 8:6. They believe that the Father and the Son are separate beings with separate consciousness and that the Holy Spirit is not a conscious being but instead the power of God.”

Unless these followers of the fourth century Arius believe that the Bible is fraught with contradictory errors, Genesis 1:2 apprises of the role of the Holy Spirit as co-Creator. His action of ‘moved’ in Hebrew is râchaph (raw-khaf’): ‘to brood;’ is exactly what the mother hen does to generate energy for procreation. Matthew 1:18, “Now the birth of Jesus Christ was on this wise: When as his mother Mary was espoused to Joseph, before they came together, she was found with child of the Holy Ghost.” As Christ did with the clay to produce the first Adam, so the Holy Ghost did to effect the birth of Jesus, the last Adam. Amen. 1Corinthians 6:19, “What? know ye not that your body is the temple of the Holy Ghost which is in you, which ye have of God, and ye are not your own?” A temple serves as a place of worship assemblage. As the LORD led them through the wilderness in the cloud, and took the seat of Divinity in Solomon’s Temple, so He sits in the spirit realm of every believer: a proof of His omnipresence.

Christadelphians was founded by Dr. John Thomas in 1864. Christadelphians believe God is one indivisible unity, not three distinct persons existing in one God. They deny the divinity of Jesus, believing he is fully human and separate from God. The “holy spirit” terminology in the Bible is interpreted as referring to God’s power, or God’s character/mind (depending on the context). Also, founded by Frank Ewart in 1913, Oneness Pentecostals believe that there is one God and God is one. Throughout time God manifested himself in three ways or “forms” (not persons), as Father, Son, and Holy Spirit. Oneness Pentecostals take issue with the Trinity doctrine chiefly for its use of the term “person.” And for the adherents of Binitarianism, “They taught that the Holy Spirit is not a distinct person, but is the power or divine influence of the Father and Son, emanating out to the universe, in creation, and to believers.”

Is it true that the Holy Spirit is just an impersonal inanimate thing? Why then will the word of God say of Him: “And whosoever speaketh a word against the Son of man, it shall be forgiven him: but whosoever speaketh against the Holy Ghost, it shall not be forgiven him, neither in this world, neither in the world to come;” in Matthew 12:32? The Greek for ‘Spirit,’ pneuma, means: ‘wind or breath.’ How can anyone, in any way, sin against an ordinary wind? Or is the Spirit of God an unseen robot to be said of Him in Luke 2:26 “And it was revealed unto him by the Holy Ghost, that he should not see death, before he had seen the Lord’s Christ.”

Mark 13:11 reads, “But when they shall lead you, and deliver you up, take no thought beforehand what ye shall speak, neither do ye premeditate: but whatsoever shall be given you in that hour, that speak ye: for it is not ye that speak, but the Holy Ghost. “ This cannot be a robot. The human author of the book of Luke penned in the third chapter of the twenty-second verse thus: “And the Holy Ghost descended in a bodily shape like a dove upon him, and a voice came from heaven, which said, Thou art my beloved Son; in thee I am well pleased.” He is really not an inanimate thing! Let us see Him in another activity found in Acts 13:2 “As they ministered to the Lord, and fasted, the Holy Ghost said, Separate me Barnabas and Saul for the work whereunto I have called them.” Mark some words of exhibition: ‘said,’ ‘me’ and ‘I.’