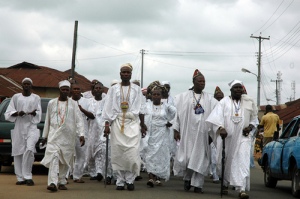 In the Western Nigeria of Yoruba land where white garment churches sprang from, the worshippers of the chief deity, ‘Ifa’ (white garment wearing secret cult), a fetish heathenism, from which, traditionally, they grew up, do forbid wearing of footwear into their covens and shrines. Extensions of the various covens these so-called churches are, of truth! There is a man called Olutanmole, who owns an Aladura Church. Aladura means ‘a prayerful person’; and these are the white garmented ones. They are garbed in white because, as they maintain, angels and the redeemed wear white in heaven; or is it really because they must, like the hypocritical outwardness of Pharisees, show purity of righteousness (2Corinthians 11:14)? The name Olutanmole literally means ‘a one who sheds light’. ‘A shedder of light’ or appropriately a bringer of light i.e. light bearer which is the true meaning of Lucifer! Olutanmole, sometime in the ’90’s, I think, was interviewed on television where he said, without mincing words that he was the one Jesus referred to in John 16:7. Olutanmole, the Holy Spirit!? Swell! Does that assertion not make this church leader God, to receive reverential worship? In that same interview he disclosed that the crown he had on his head was the selfsame one Jesus wore in heaven before His incarnation. Jesus, according to him, had to lay down the crown to perform the salvational work. For his (Olutanmole) status, the crown was given to him (as if the Holy Spirit must of necessity wear a crown probably because He lacked one). He said Christ was given another crown after His earthly mission. I looked at the so called crown and could not help asking myself, “That stupid thing on your head is a celestial crown of Divinity?” Olutanmole, with no shred of doubt, is another Luciferan clown (for millions like Olutanmole are just too eager to wield Satanic authority on behalf of Lucifer).

To the vindictive others, “My enemies, die! (especially witches),” when 2Corinthians 5:18, “And all things are of God, who hath reconciled us to himself by Jesus Christ, and hath given to us the ministry of reconciliation,” is telling them that God’s business in this dispensation of grace is to reconcile with sinners. For those who are still bringing the corpse into the church auditorium for prayers please, read my post on “Is May His Soul ‘RIP’ A Prayer?”

When you see churches by the name, ‘African Church of Nigeria’ which we simply call, ‘Africa’, (where chieftaincy titles are bestowed on deserving individuals a la Yoruba tradition) beware lest you may fellowship with practitioners of witchcraft, we have been made to understand. They are known to be an infusion of Christianity and the darkness of the blackness of African magic; no kidding. A whole lots of Anglican Churches, from very reliable sources, are shrines of cultic initiation, especially of the Ogboni Fraternity (there is a particular one in Ikeja, along Agege Motor Road, Lagos State, Nigeria). These days the members do not hide their cultic participation. Large banners display their members who are of high social status, the business world and the highly respected public officers; which is intended to attract the spiritual gullibility by which man is characterized. You will think the Pentecostal adherents should not be involved but unscriptural dos and don’ts are so prevalent in this protestant sect: can you read the Bible and put up some theatrics, hey, you are a pastor, a la Pentecostalism!

Then there is the innocuous Jehovah’s Witnesses. They are definitely not harmless. Anyone who believes in Jehovah but does treat HIS Christ as another angel is as a spiritual pollution as the teachers of Docetism. John wrote of them in 1John 4:3 & 2John 1:10-11. Do you understand what Jesus is intimating us with when He declared, “I and my Father are one” (John 10:30). The conjunction ‘and’ kai (kahee) by Thayer Definition is: ‘and, also, even, indeed, but’. Origin: apparently, a primary particle, having a copulative and sometimes also a cumulative force.’ The auxiliary ‘are’ is esmen (es-men): First person plural indicative of eimi; meaning: ‘we are.’ ‘One,’ in this verse, heis (hice) is ‘one – a neuter gender.’ It is indicative of a substance. St. Augustine was right in saying that the ‘we are’ debunks Sabellian’s denials of the distinction of Persons in the Godhead, while condemning the Arian’s (who influenced Charles Taze Russell, the founder of Jehovah’s Witness) insistence that Christ is homiosious (of a like substance with the Father) and not homoousious (of the very substance as the Father) which Jesus, here, declares. My Christian people do not study the Bible at all!

In the book of Matthew 13:43 Jesus explained the figurative parable in the clarity of the literal concreteness to erase any iota of human doubting propensity. Verse 42, “And shall cast them into a furnace of fire: there shall be wailing and gnashing of teeth;” has words like: ‘cast’ ballō (bal’-lo) ‘to throw or let go of a thing without caring where it falls;’ ‘fire’ pur (poor) A primary word; ” fire” (literally or figuratively, specifically;’ ‘wailing’ (which is not dakruō (dak-roo’-o) ‘to cry silently’) it is klauthmos (klowth-mos) ‘lamentation’ which comes from klaiō (klah’-yo) ‘to sob, that is, wail aloud;’ the conjunction ‘and’ between wailing and gnashing is: kai (kahee): ‘and, also, even, indeed, but.’ Then we have, from the same verse, ‘gnashing’: brugmos (broog-mos) a grating (of the teeth) this brugmos is from (bruchō [broo’-kho] ‘to grate the teeth (in pain or rage).’

There are six other verses which talk about gnashing of teeth. Jamieson, Fausset and Brown Commentary does an excellent job as it comments that: “”casting” or “flinging” expressive of indignation, abhorrence, contempt (compare Psalm 9:17; Dan 12:2): “the furnace of fire” denoting the fierceness of the torment: the “wailing” signifying the anguish this causes; while the “gnashing of teeth” is a graphic way of expressing the despair in which its remedilessness issues.” Revelation 19:20, “And the beast was taken, and with him the false prophet that wrought miracles before him, with which he deceived them that had received the mark of the beast, and them that worshipped his image. These both were cast alive into a lake of fire burning with brimstone.” Revelation 20:10, “And the devil that deceived them was cast into the lake of fire and brimstone, where the beast and the false prophet are, and shall be tormented day and night for ever and ever.” Revelation 20:14, “And death and hell were cast into the lake of fire. This is the second death.” Rev 20:15, “And whosoever was not found written in the book of life was cast into the lake of fire.” Four scriptures, these are, testifying of a physical great pond of raging conflagration!

The society of door knocking, a founding of Charles Russell, will never agree with these exegeses of overwhelming scriptural truth, but will rather sink their ignorant teeth in unrelated verses like Acts 2:29 “Men and brethren, let me freely speak unto you of the patriarch David, that he is both dead and buried, and his sepulchre is with us unto this day;” and the first part of Ezekiel 18:20 “The soul that sinneth, it shall die…” to explain ‘no hell’ away. Another defensive argument they give is by querying, “How can a merciful God be so wicked to burn people?” Russell and his witnessing lot do not study the Holy Bible for if they do they would have remembered the story of Lazarus and the rich man, one in a comfortable ‘Abraham’s bosom’ and the other in hell (hades – land of the wicked dead)! God would not burn people, really? What about the rain of conflagration HE poured in torrents on the twin nations of Sodom and Gomorrah? Too merciful eh? What did the great Deluge do to all earthlings save the eight souls of Noah’s family? Try drowning to death and understand what a painful thing they were judged with by this same JEHOVAH!

The book of Genesis begins with, “In the beginning God…” where God, Elohiym, is a Hebraic plural noun. I have searched the scriptures and the plurality of this God, according to HIS protocol, the Bible, there exist only THREE PERSONAGES, in the Godhood (the original word for Godhead). I searched further on and I found that the singularity of Elohiym which is Elowha, appears 56 times; fifty-one times in designation to Jehovah and the remaining five in connection with an idol. If the scripture has in this wise explained the Trinitarian conundrum, it then follows that the possibility of a fourth member of the Godhead must, as of a necessity, be a created one. Four, is the scriptural number for creation. The Church, the new created people of God, the Bride of Christ, sharing a common Holy Spirit with God is the fourth that shall be the apocalypse. Jesus said, in John 14:3, “…that where I am there ye may be also.” There are times when a verb is not an inflection of another in scriptures, but not in this verse. The verb ‘am’ is: eimi (i-mee) ‘First person singular present indicative; a prolonged form of a primary and defective verb; I exist (used only when emphatic).’ This eime is what it is expressed when God told Moses, ‘I AM’. The auxiliary ‘be’ is the Greek: ō (o) Thayer Definition: ‘be, may be, etc.’

Strong’s Definition: ‘Including the oblique forms, as well as ēs (ace); ē (ay,) etc.; the subjunctive of eimi; (may,might, can, could, would, must, etc.; also with other particles) be.’ The subjunctive definition of be, in its removal of doubts, prove our spiritual relationship with God. The Bible says when we are transmuted we will be like Christ, higher than the angels. Our inheritance is the very throne of God. This is exactly what Lucifer tried to acquire unsuccessfully. For this reason he hates man, lying to esotericism that he, Lucifer is the rightful owner of the throne and they are, in their millions, falling for the grand deceit. They have what they need: political and economic power to consummate the installation of the antichrist.

The Antichrist (as world ruler)

This reminds me of Rev. Chris Okotie’s very deep teachings. He taught, “When Jesus resurrected, two others stood up, the angels and the Roman soldiers, even after they fell as if dead; (meaning that, according to Pastor Chris Okotie), Rome will be in control of global government when Jesus returns and with the angels. The priests, representing the Jewish Ecclesiastes gave money to the Roman soldiers to lie about the truth of the resurrection, which they had told the priests. The priest provided the economic power to the Roman political power.” Great revelation! Is it not? What Okotie taught is happening presently. The Jews are the richest people on earth today. The likes of Rothschild, Rockefeller, Merovingian dynasty, Collins are said to be of Jewish descent. You will never hear of the extent of their riches because it is unbelievably too enormous! With this kind of stupendous wealth and the satanic power they wield, they have funded the establishment of governments, religious institutions (which they continue to support financially) and have funded the publishing of bible versions (with so much corruptions of God’s word). All of these incursions are done in a nefarious bid to run as a parallel assemblage to give an evil counter effect to the productiveness of God’s Church, when they would have installed the antichrist. Let thy Kingdom come! Amen!