Satan was wise enough to choose to approach the Woman in the Garden of Eden in his quest to take over the world. At the creation when, Adam, the man took dominion steps, he represented Jesus, but when the Woman was made we see Jesus the Christ, the mystical body of Christ, the Church! “Where two or three are gathered in my name….” It was the one who constituted the Church Lucifer attacked, so that he too could have his own church – if he should succeed. He did. Eve, the Woman, did not follow Lucifer but she helped Satan to prevail, how? By uttering, in the Garden (of God), words which were not of God. She added to God’s word. God did not say, “You should not touch,” in Genesis 2:16-17. Probably thinking that she was defending God, like some of our church people are, these days: sincere, but sincerely wrong. Cain also got briefed by Satan. Cain got totally hooked but unlike his parents he decided to work assiduously for the cause of Satanism. He built a city (the first in biblical annals). Religions commenced!
Many church worshippers do not know that they are doing the bidding of an individual, with all these unscriptural teachings and practices. The germ of unchristian churches was incubated in the Woman. Satan knew he must needst use the Woman: for in her dwelleth the fecundation triggering the proliferation of propagation. Adam’s taciturnity stupidly fertilized the evil egg that the serpent placed in his wife; and in Cain we behold the engendering of the fruitfulness of its devilish propagation. Satan is using men to erode the significance of the Church. This brings to mind a fast growing church in Nigeria.
It is Mountain of Fire and Miracles Ministries, which stock in trade is the vehement hurl of fire at perceived enemies. “The man or woman disrupting my progress, fire on you! Die! In Jesus’ name!! The officer sitting upon my promotion letter! Die! In Jesus name! Witches and wizards who are ganging up against me die, die, die, die….. .” Mountain of Fire people pray this prayer with such fervency such that anyone who prays without a vigorous shaking of his head is not seen as praying hence not one of the praying group or congregation. When disturbing questions were raised, they back-pedalled, saying that it is actually to the possessing demon, in the enemy, the imprecations are meant. Yet, to that, I laugh because it makes their matter worse. It paints a vivid picture of the scriptural naivety of the church’s leadership. Demons just do not die! The one who will suffer the death may be the human tool of demonism (where is the love in your Christian heart?) If someone has to die let it be God to decide and not you (Matthew 7:3). God is, in these last days, in the business of reconciling sinners to Himself. You decide to snuff out the life of a one causing spiritual harassment in your life not knowing that at the demise of one evil doer, demons will always have ten new, more eager, humans to replace the dead antagonist to exacerbate your spiritual predicament. So, if God has decided to reconcile the evil doer to Himself, and you say, “DIE!” are you not working against God’s intension? Your opinionated stance keeps you reasoning, “But the enemy will likely get stronger; what if he kills or destroys me?” “Let me knock him off!” you conclude. This is most definitely the faithless stand of an unbeliever. David ever admitted the foray of the enemy but hear him in one of his famous Psalms, “Thou preparest a table before me in the presence of mine enemies: thou anointest my head with oil; my cup runneth over.” David knew that God is always in charge. Do be careful of testimonies. An M.F.M. lady shared a member’s testimony: “A man in our office did everything to thwart my promotion. We had a prayer session in church. The following week, after we prayed in agreement for his death, we just heard that he died and I got my promotion!” Tell me, would anyone who does not know 2 Corinthians 5:18-19 not say, “Eureka! I’ve got the antidote to take care of my own enemy,” with a testimony like that? And there abound several testimonies of this kind shared in their churches. Testimonies become the source of God’s word and less of the infallible Bible. Of late, among several others in their spiritual arsenal is the use of ‘dust against their enemies!’ T. B. Joshua of Synagogue Church of all Nations is the worst anomaly. Who called this ‘man of God’ (or rather ‘man of ‘god’’) to the altar of regeneration? He is the one to watch in the bastardization of the Church. The chant of ‘EMMANUEL!’ rents the atmosphere in his eulogy and to receive, providentially, in his church. Worshippers buy his image for domestic and office protection. How dissimilar is this from Revelation 13:14-15, tell me, please 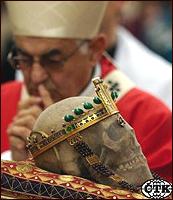 ? Like many of his satanic ilk, he is very philanthropic, because they have been taught, in their esoteric covens, to be doing a lot of good deeds to balance their evil propensities.

Worshipping the skull of a dead saint

Empiricism, rationalism borne out of human philosophy and experience (from which Gnosticism finds strength) are the bane of church backwardness. There is an unbelievably acute dearth of scriptural information choking the spiritual progress of the local assemblies. That notwithstanding, there are some churches that still teach the truth, and nothing but the truth of the word of God, straight from the Bible! I prayed hard, many years ago, asking God to give me a church, my church where I can worship, devoid of the religious straitjacket; and which will take absolute care of m
y spiritual needs. I got it. Do the same, sincerely, if you are not well fed spiritually by your church; you will get it! Amen! Praise the LORD!